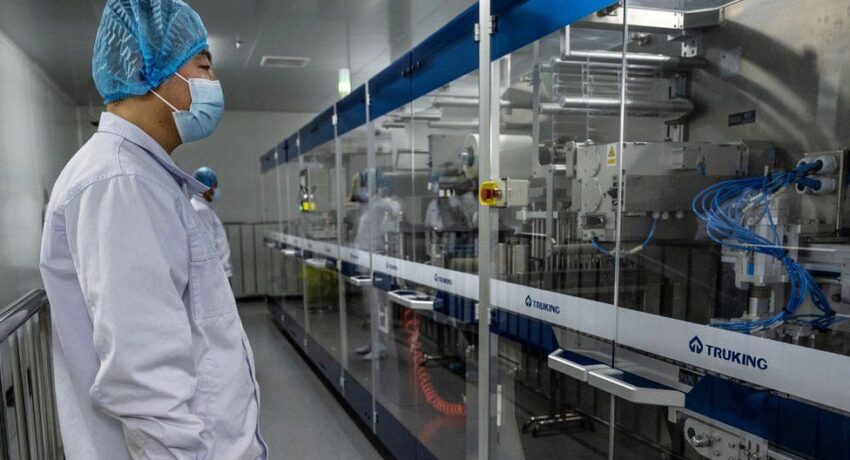 Covid-19 vaccines: Has China made more than other countries combined?

China says it has provided more than half of all the Covid-19 vaccines manufactured globally.

We’ve looked into this and found that the answer isn’t as straightforward as you might think.

What is China’s claim?

A video posted on social media by the Chinese Communist Party’s youth league claims that over half the world’s vaccines have come from China.

It was posted on Weibo – the Chinese version of Twitter – at the end of September, just as the number of Covid vaccines administered globally had passed six billion (according to the website Our World in Data).

So, was China responsible for producing more than three billion of these – both for domestic use and for export?

We know China has a very big production capability and claims to have administered 2.2 billion of its own vaccine doses (as of 27 September).

However, we have no means of verifying China’s own figure for how many doses have been administered within the country.

China is also a leading exporter of vaccines – both via commercial partnerships and donations.

Some of these exports are in the form of bulk vaccine components which are processed and packaged in the destination countries.

The Chinese foreign ministry stated (on 23 September) that “China has provided 1.2 billion doses of finished and bulk vaccines to more than 100 countries and international organisations”.

Can China’s exports be verified?

The data analytics company, Airfinity, has tracked global production, and estimates that China has exported commercially 1.1 billion doses (as of 8 October) of its vaccines to 123 countries (as either bulk substances or finished doses).

Of these, around 110 million have been purchased by the Covax global vaccine-sharing scheme to provide vaccines to lower-income countries.

In addition, according to UN data, China has so far delivered around 37 million doses as donations (as of 1 October) out of a total pledged of around 52 million.

So the Chinese claim of 1.2 billion doses exported may be slightly on the high side, but pretty much matches the combined estimates of others outside China (1.138 billion).

Added to the figure of 2.2 billion for doses given in China itself, that’s more than half of six billion doses given globally – with the caveat that we can’t be certain how many exported doses have actually been used so far.

Some of the export deals China has done with other countries involve partnerships to produce vaccines abroad.

In the United Arab Emirates, for example, a deal was signed in March to produce Chinese vaccines locally, using ingredients supplied by China.

And the Brazilian company Bio-Manguinhos/Fiocruz has produced more than 100 million doses of a vaccine based on AstraZeneca’s medical technology – but using ingredients supplied by the Chinese firm, Wuxi Biologics.

Based on official customs announcements, it appears that Chinese export figures include all these bulk substances sent abroad in addition to finished vaccines produced in China itself.

How do other countries compare?

In terms of vaccine doses administered domestically, China had reached 2.2 billion on 6 October – compared with more than 923.5 million in India, 571.4 million administered in the EU and 398.7 million in the US, according to Our World in Data.

Data for the export of vaccines provided to us by Airfinity shows that the European Economic Area countries (the EU member states plus Iceland, Lichtenstein and Norway) have so far exported 853,015,179 doses. The figure for the US is 178,592,930 doses.

These figures include donations from the US and EU, but those two regions do not generally export bulk vaccine substances outside of their areas – so the figures are for finished vaccines only.

India had exported about 66.4 million doses of its locally-made vaccines as of the end of May, when exports were suspended.

Russia had also promised to provide its own vaccine globally, but it’s not clear how much has actually been exported.

The rate of vaccine production globally has been gradually increasing, driven by the big producers ramping up manufacturing.

Research by Airfinity forecasts that by December, a total of 12.2 billion doses will have been produced around the world – 5.7 billion of these Chinese vaccines and the rest non-Chinese.

But Airfinity also points out that large stockpiles of vaccines are building up in wealthier countries which have yet to be earmarked for use.

And it’s worth saying that the figure for doses which are exported, is not the same as that for doses actually used.

In some countries, a lack of proper infrastructure, staffing constraints and other issues, have held up the rollout of vaccinations.

We’ve looked at how some of these issues have affected the pace of vaccinations in poorer countries, especially in Africa.